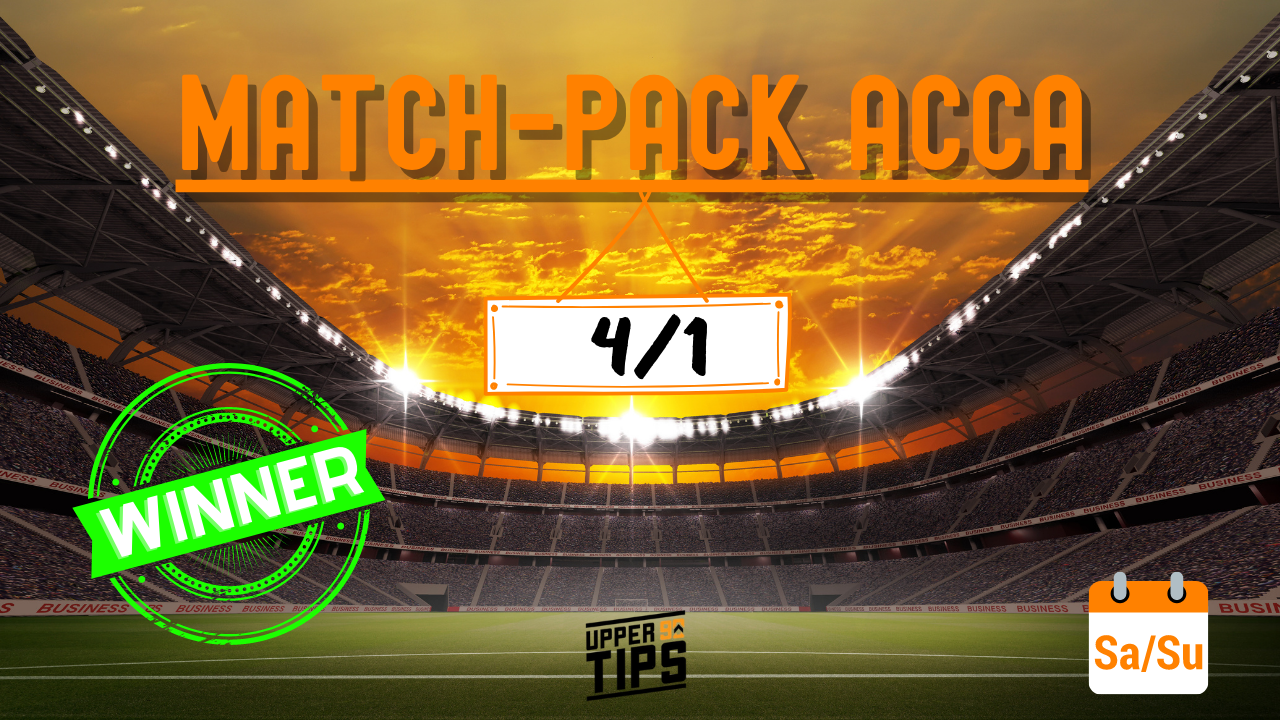 It’s Saturday again… which means today is the start of another bumper weekend full of football across the continent. It’s been a busy week of domestic action, with midweek league fixtures across England and Italy supplemented with some cup drama — courtesy of the Copa Del Rey and the DFB Pokal — from Spain and Germany.

It means another Match-Pack Acca is ready to go. A four-way of highly researched tips, all on Saturday coincidentally, with a high-reward potential.

This week’s tips take us through Europe with a couple of pivotal European deciders in Germany, followed by a relegation dog-fight in the Prem, before a mouthwatering tie in Italy this evening. Four massive games in the context of the teams competing, and four interesting fixtures to keep an eye on throughout today…

The first of this weeks tips is one of the aforementioned Bundesliga ties, with Champions League-chasing Eintracht Frankfurt hosting Stuttgart at the Deutsche Bank Park early this afternoon.

The hosts had been on an incredible run of form, with 8 wins and a draw in 2021, until they lost 2–1 at Werder Bremen last weekend — a run which has propelled them into the Champions League places, in the hope of going toe-to-toe with Europe’s elite for the first time since their European cup final defeat to Real Madrid in 1960.

Stuttgart, in some contrast, sit comfortably mid-table. They have won their last 2 — albeit against FC Koln and the disastrous Schalke — producing performances typical of that of a mid-table side; clearly free of pressure whilst simultaneously short of quality.

Where Pellegrino Matarazzo’s side have found consistency, however, is in goals — both for and against. The mid-table side are 3rd in the Bundesliga for goals per 90 minutes (1.91) whilst finding themselves 8th worst for goals conceded per 90 (1.52). their opponents aren’t too far different either, averaging 1.83 goals scored per 90 (4th highest) and 1.35 goals conceded (joint 4th lowest) per 90 minutes.

both Frankfurt and Stuttgart are in the top 5 most likely to record a BTTS result in the Bundesliga this season, with the Die Adler doing so 83% of the time and Die Schwabenmetropol (no chance of pronouncing that) doing so 74%.

From a ground hoping to host Champions League ties next year to a ground likely to be sitting in the Championship. Bramall lane has been a place of misery this year as Chris Wilder’s Sheffield United look dead-set to finish bottom of the Premier League.

The misery continues on Saturday as they host the only side in the league worse off than them in the last five games, and a side with just one win and four points in 2021: Southampton.

Both sides are in a turgid run of form, and whilst Sheffield have seemingly accepted their fate, Southampton are clinging on to a comfortable end to the season — 7 points ahead of Fulham, they may well be dragged into the relegation dog-fight.

The diagnosis for both sides has been a drought of goals. The Blades have hit just 16 goals all season (0.56 per 90 minutes), whilst recording an xG/90 of just 0.89, whilst the Saints’ early season form has hit a rock, blanking in four of their last seven and recording an average xG/90 during those games of just 0.93 — Danny Ings hasn’t scored in his last 4 appearances since returning frim injury.

And so Saturday’s fixture feels like one in which neither side are confident in front of goal, and also a game in which both sides may well be happy with a cagey draw. One things for sure… it is unlikely to be a goal-fest.

Bayern returned to winning ways last weekend with a dominant 5–1 win against FC Koln. Previous to that they had gone two without a win — a relative drought for Hansi Flick’s side — drawing 3–3 with Arminia Bielefeld before losing 2–1 to Frankfurt. Those two results, alongside their 3–2 loss at Borussia Monchengladbach, were the only time Die Bayern had dropped points since the turn of the year — a run which had seen them win 7/10 league fixtures.

Dortmund go into this evening’s fixture in a much more precarious position. Inconsistencies throughout the season — not helped by the sacking of Lucian Favre in December — has them 3 points short of Frankfurt in the final Champions League spot. Any attacking consistency, courtesy of Erling Haaland & Co., has been marred by defensive frailties which has seen them concede an average of 1.35 goals per 90 minutes (from an xGA/90 of 1.10). Interestingly, their goals conceded per 90 record is better (just) than top of the league Bayern, who concede, on average, 1.39 goals per 90 minutes from an xGA/90 of 1.33.

Teams aside, this evening’s fixture sees two of the world’s most prolific strikers, in Haaland and Robert Lewandowski, go toe-to-toe. Old vs young. Master vs apprentice. Veteran vs Prodige:

Another Saturday evening beauty, this time from Italy, as Udinese host Sassuolo at the Stadio Friuli in Serie A. A mid-table clash this may be, but both sides are bound to offer up much more than the usual mid-table bore-draw we see in England.

A run in which Udi have lost just once in eight has pulled them away from a relegation scrap — they were always slightly ahead of the pack anyway — and seen them push into the end of season serenity of mid-table. Their freedom has seen them produce performances full of excitement; open going forward and at the back, producing a brilliant 2–0 win against Hellas Verona and a 1–1 draw at AC Milan last weekend.

Roberto De Zerbi’s side have dropped away from European contention with a run of just one win in their last eight league games, leaving them eight points behind Napoli in 9th.

It’s been a strange season for De Zerbi’s side, as with everyone, plagued by injury and fatigue during a season like no other. They looked to have flown out the blocks early on, but hit a mid-season slump which saw them win only twice in 13 games between December and February.

Results aren’t always a direct comparison of game-state, however, and I Neroverdi’s performances haven’t been short of promise. In their last four games (pictured below) Sassuolo have averaged 18.75 shots (5.25 on target), 18.5 crosses and 7.25 corners, whilst their shot-creating actions per 90 minutes (SCA/90) has them 6th — inbetween AC Milan and Roma — with 22.83.

A four-fold acca racks up at 3.97/1. High-reward potential for a four-fold so heavily researched.

As always… enjoy your weekends!